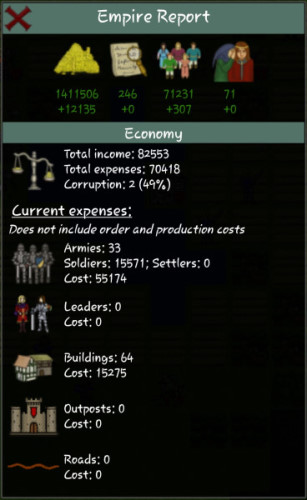 With version 2.1.5 of Rising Empires 2 an updated, and more stable, graphics engine was introduced. The map freezing issues on the previous versions of the game are a memory of the past but a few other bugs crawled their way into the code. I’m working on fixing these and this brings me to the other subject I wanted to bring up today…

Yes, I’m talking about the running beta test. Work is progressing on the next update which will be 2.2.5. This is mainly an update to the AI which already sees, at least in my eyes, improvements. But I also take the opportunity to add more information about your empire, as can be seen in the empire report above, as well as fixing bugs and other errors.

Below is a list of the current changelog of the beta version of Rising Empires 2:

Would you like to participate in the beta test?

If you do you’ll be able to test new functions and improvements before other players. You need to own the game on Google Play to join.

To join the beta test please send an e-mail with your google-mail to apps@norberg.one. I’ll add your e-mail to the list of beta testers and send you a link allowing you to sign up to the beta program.

I hope to hear from you soon.