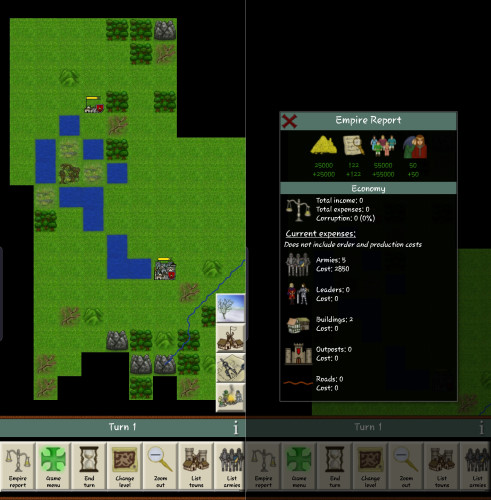 Okay, you’ve pressed the create new game button, watched the cool picture while the new world was generated and now the map has opened up in front of you.

What to do? First, let’s look at the situation in your empire.

There are a lot of opening moves in Rising Empires 2. How to optimise your first turns depend on what race you’re playing and your starting position. I once started a human empire where the second town was without any food production since it was surrounded by water and deep forests. Having to build settlers and decrease my population in my starting town was a first for me. It also decided my research focus for the first game year or so.

There are three things you need to focus on during the first turn; selecting research, send out your scouts and start construction projects in your capital and town.

As I wrote above, this depends a bit on your starting race and situation. In the scenario above with my starving town I was saved by the water. I started researching fishing on turn 1.

Normally a good starting technology is military organisation since it will unlock the barracks building and open up the military part of the technology tree. Barracks gives a big boost to your settlements ability to build new companies quickly. This is not obvious when you train militia and settlers but as soon as you start creating your own company types you’ll notice that they can take multiple turns to complete.

For the secondary research there are plenty of good options. It depends on what you want and your playing style. Improved society, culture, economy or kiss of death. All are good choices. Or farming and fishing if you need a better food output.

The slightly more daring leader moves the settler to the town and settle there to increase its population.

The wild and crazy leader combines the militia army and the settler into a single army and march out to settle a new town. If you do this, be sure to build a new militia right away. Nobody wants to have their capital raided by undead horrors…

In both your capital and the smaller town there are plenty of room for new buildings. A good start is to build a courthouse to increase the maximum loyalty and decrease the corruption level in the settlement and a granary to allow the settlements to store more food during winter (it’s not fun to starve). A wall might be nice as well to give the militia army some small defence bonus should things turn ugly.

After that you it’s up to you if you want to specialize your settlements and focus on a single purpose, like research, or make them more generic with better output in all areas. Choices like these might sound boring compared to the pleasures of the battlefield but without well planned cities there won’t be much in ways of pleasure.

You also need to start building more companies. Scouts to explore the wilderness surrounding your settlements, armies to push back invading monsters and empires and settlers to found new thriving towns.

Welcome to the world of Rising Empires 2!