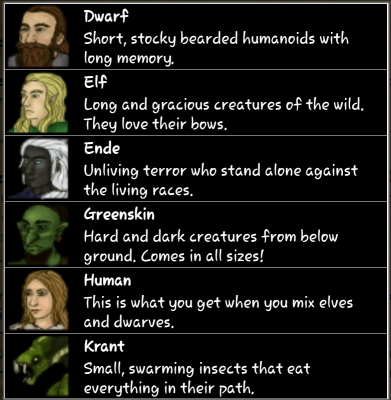 You’ve decided to start a new game of Rising Empires 2. Exciting times are ahead of you, as your scouts and warriors explore the darkness of the Netherworld and the Surface beneath the burning sun.

The process to create a new game is split in four tabs; Race, Religion, World and Computer.

Under the Race tab you decide the foundation of your empire. Most importantly what race to play:

Here you can also decide the empire colour and name.

Not deciding is also a decision. If no changes a random name will be selected for a green human empire.

The second tab allows you to decide the beliefs of your loyal subjects. There are seven religions to choose among:

Not deciding means that Strength in neutrality will be selected as the belief of your loyal subjects.

Under the World tab all game settings and victory conditions can be set. The standard settings are that all empires start with a second smaller town and a wilderness filled with horrors lurking around and hunting your poor scouts. Map size sets how much map is generated for each empire. Fast means that empires start closer to each other while epic means longer distances for your armies to trek before they find their target. The total map size is also affected by the number of enemy empires that are selected under the Computer tab.

If you select observe mode an AI will be created for your empire and will issue orders at the start of each turn. If you wish you can observe the computer as it tries to do its very best to play your empire or you can take a more active part and change or adjust the orders issued by the AI.

The last tab, Computer, lets you decide the number of opponents as well as their race, religion and bonus that you’ll encounter in the game. When deciding what empires to encounter it’s important to know that the game world is divided between the Surface and the Netherworld and that all races have a specific start level (see information above). An equal number of empires must be created at each level. The number of empires that can be selected is 2, 4, 6 and 8 including your own empire. For each individual empire the race, religion and bonus can be set.

The difficulty setting will also set the bonus level for all empires.

There are four difficulty settings:

When you’re satisfied with you choices and decisions and are ready to start your new game of Rising Empires, just press the Create game button and start your journey to dominance.